How did I come into healing and spirituality

I traveled for a few years throughout parts of South America.
I left my studies searching for a life of freedom, and decided to travel to Cusco as an artisan. I thought I had found happiness. I was free from the control of others, I was earning enough money to eat, rent a room, and continue traveling as an artisan and juggler. It was easy for me to think that I was satisfied with nights of parties, alcohol, and marijuana, but I began to ask myself if this was the life I desired. Something inside me called me to observe myself and my surroundings, and I began to see that what I had found was just an illusion. I tried to come to terms with my mind and the minds of those who I thought were my best friends. Although surrounded by people, I encountered a great solitude and tried to hide my feelings, pretending I was happy in front of them.

I began to pray and meditate. I had never believed in religion but this sensation inside ordered me to communicate. In this way, I began to follow the voice inside; my own intuition. I had never heard of vegetarianism or perhaps I had just never paid attention, I don’t recall, but I started to meet other travelers who were vegetarians and I felt a revelation that told me this was the correct thing to do. All of these thoughts and feelings combined led me to make a radical change in my life. Truthfully, it felt strange and mystical and to try to describe this I must take a little more of your time.

I was in the jungle of Peru when an insect stung me and left me with an injury that would not heal. I was far from home and it was a blessing to go back there. Although I was meditating and trying to practice controlling my mind, I felt alone and depressed. Questions appeared with greater intensity; what is the purpose of this life? Why do people suffer? Why does man destroy nature? Why must we die? Who am I in reality? Am I this body? This clothing of muscles, skin, and bones? 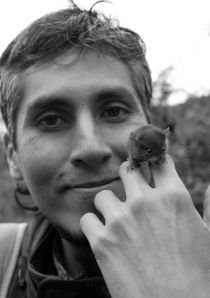 When I returned home I became ill in the stomach and the injury in my leg made me feel miserable. For luck or blessing, my uncle, whom I had always admired, came to visit me. When he was young he lived part of his youth in a Tibetan temple where he learned martial arts and the art of Tibetan medicine. He suggested I start a daily routine. I took his advice and woke up very early in the morning, took a cold shower, put on clothes without drying myself, and did a breathing exercise called Prana Yama. After that my uncle transmitted Prana, or vital energy, to me through the palm of his hands. This is the form of healing commonly known as Reiki.

He gave me massages and later taught me to increase my vital energy by using the practice of Chi Kung. In a short time the diarrhea I had for more than 2 weeks subsided and I felt better and very inspired to learn more from my uncle. It was good fortune that I did not have to pay for a course and furthermore was gifted with an instructor who was very close to me and in whom I had the trust and time to ask all the questions I needed.

Regrettably, I have seen many people throughout the years making a business of selling Reiki certifications who are in reality pseudo-teachers of Reiki. These “teachers” use drugs, alcohol, and/or eat animals, thinking that Reiki can purify their minds and bodies regardless of what they consume, and they go on to teach this to their students. This is very harmful because the energy of Prana, or Reiki, functions according to more subtle laws, such as the law of action and reaction known as Karma in Sanskrit.

What I learned is that any person can transmit Reiki, as long as his actions are pure and lives according to universal truths. This journey is difficult for many because it orders detachment from many things. A reiki practitioner is a servant of the Supreme, therefore he must not contaminate his body and mind in order to transmit Prana in its purest form to the recipient.

I lived as a Vaishnavan monk for 7 years in a Bhakti Yoga ashram.

I am eternally grateful to my spiritual master for all his help, patience, and unconditional love that he has for all his disciples around the world.